On the 17th of January Frances prime minister went onto live TV, with the minister of interior on his right hand side and that of the environment on his left. He was going to finally announce the government’s decision about the airport of Notre-dames-des-Landes and the fate of Europe’s largest defensive land occupation, the ZAD.  The destructive infrastructure project, on the western edge of France, has been resisted since its inception 50 years ago, and over the last decade it’s 4000 acres of land have been squatted and turned into a giant laboratory of commoning, with over 100 living spaces and several hundred people occupying and working the land. 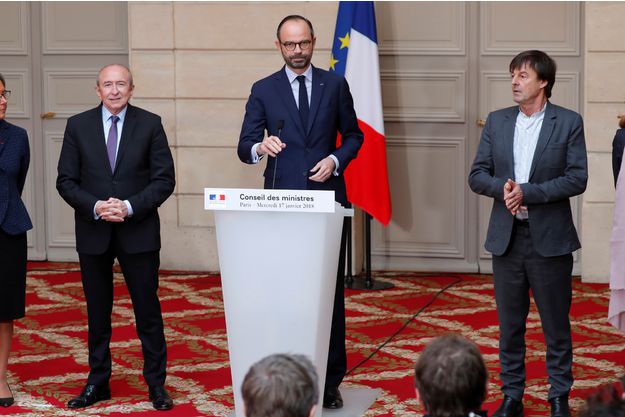 The airport has been a thorn in the side of every French government that has ever tried to build it. The prime minister Eduard Phillipe spoke for twenty minutes, the cameras whirled and he tried to remain calm as he announced that the Airport would never be built, that the rule of law would return to the outlaw zone, that all expropriated farmers could get their land back and that the illegal occupiers of the zone would have to leave before the 31st of March, after which they would be evicted.

There is much to write about this historic win, (see the text ZAD WILL SURVIVE) and the threats of future evictions that came with it, but in the meantime we would like to invite you to a huge victory party on the 10th of February, where we will celebrate the fact that this unique landscape of forests, fields and wetlands will never be turned into giant machine for burning the climate, never ! It is also is a victory of all those who have put their bodies in the way of the machines for decades, a victory for a truly popular movement that brought so many differences together into a rich composition, a victory for an an unimaginable diversity of tactics from sabotage to petition writing, direct action to mass demos, it a victory for all those who live on within this bocage (the name of the this specific type of landscape, a rich chequerboard of small fields, hedgerows and forests) and are trying to reinvent forms of life together despite capitalism and the state.

This short video with the voice of  actress Lizzie Brochéré, star of American Horror Story and Falling Water takes you on a intimate journey through the zad and invites you to the celebrations.

We announced the party before the governments decision, it was to mark the running out of the Declaration Public Utility without which no airport can be built. If the government had decided to go ahead and build it, the party would be one of defiance and to again show our strength. The last time eviction threats surfaced, in October 2016, 40,000 people converged on the zad and planted thousands of staffs in the earth, making a pledge to return if the government set foot on the zone.

But since the good news has come, the 10th of February will a day to celebrate the burying of the project, to show that the ZAD is here to stay, that we are going to continue to grow roots deep down into this territory and to demonstrate our solidarity with other struggles against destructive projects around the world. 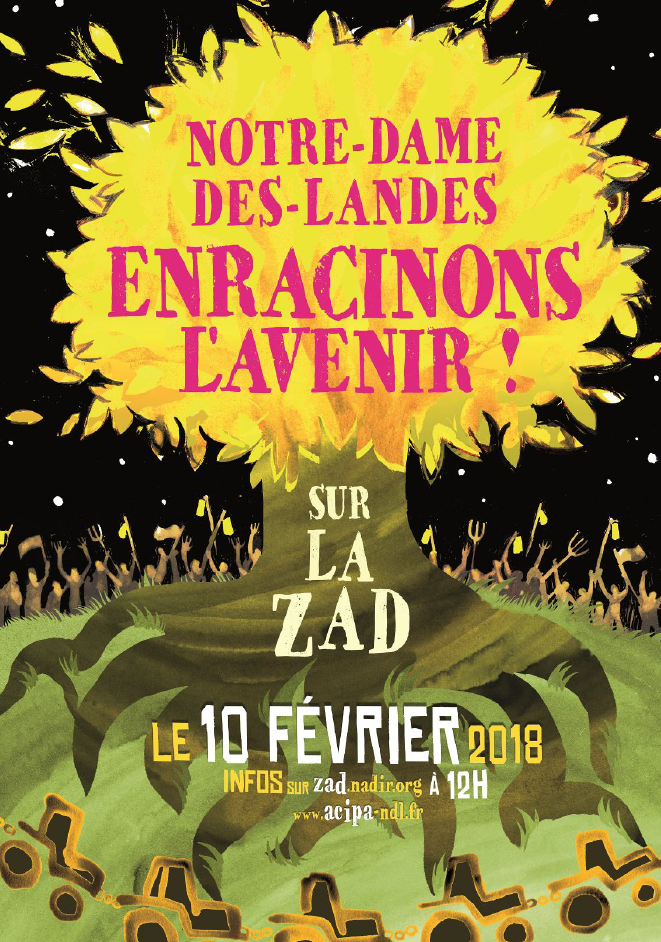 Everyone is invited to bring saplings, bushes and shrubs to plant and enrich the hedgerows with and as it is carnival time we ask you to come disguised with the theme, ‘we are the bocage’. Marching bands, a giant fire breathing salamander and other mythical beasts, will lead the crowds through the zone towards a convergence point where everyone is invited to put effigies (in wood,paper or cardboard) of unwanted projects against which they are resisting into a giant bonfire with a big surprise at its heart ! With a plethora of musicians, bands and invited Dj’s, we will dance and feast together late into the night.

We look forward to welcoming you to this zad which always will be, for ever !

For accommodation or lift shares go here. There will also be camping spaces and local municipal spaces to sleep in,  email: hebergementnddlzad@riseup.net for details